I decided to sort these by Game Title. Going by author meant I'd be playing a lot of games from the same person in a row, and I think that would be less interesting than mixing it up. Coincidence of coincidences, I knew only 1 game going into this experiment, and it happens to be the first one. Also, a quick disclaimer, Joshua Schonstal, the co-developer of / Escape \ is a coworker of mine at Kongregate, and is partially known for the very creative XBLA co-op microphone game PewPewPewPewPewPewPewPewPew (yes, 9 "Pews").

/ Escape \ is an "escape" game with a cute, punny twist - it uses only the "escape" key on the keyboard to play the game. The concept is simple and not terribly original - you jump up a thin corridor with a laser chasing you ever faster, and you can't hit the spike strips on the side. There's no "winning", you just want to get the best score possible. 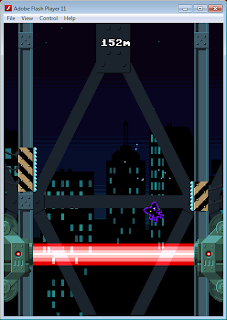 In terms of design, the game does a number of things very well. The graphics are crisp and detailed. There's enough going on that you can imagine a variety of stories about what exactly is going on here. What is this little glowing purple creature? Why is he trapped? What kind of city is in the background? Why does this construction site have laser beams?
The controls are very tight, generally making me feel like when I lose it's my fault. There's a good sense of physics and momentum that you can build up when timing your jumps, though generally this gets to be faster than you can reasonably maneuver very quickly. The music is effective, and the very few sound effects add just enough auditory feedback to make it all gel.
Score:
Presentation: 3 / 3. This is a very slick and polished game given its scope and development time.
Originality: 1 / 3. The setting is interesting and I like the character design, but truth be told it's not a particularly original concept or implementation.
Fun: 2 / 3. The game on its own can grow a stale before too long, but if you have a few friends competing for high scores it can be surprisingly compelling (which occurred in the Kongregate offices).
Bonus point: 1 / 1. The game is tight, silky smooth, and just feels good to play.
Final score: 7
Finally, hours of jumping off walls in Super Metroid have paid off! The game is fun and definitely worth playing...just one more time...
Posted by Pec at 10:03 PM

Pec
During the day I work on QA and Developer Support for Kongregate.com, under the screen name Phoenix00017. By night, I'm a game designer. While I have a few small games I've worked on previously, CellCraft is my first big project.